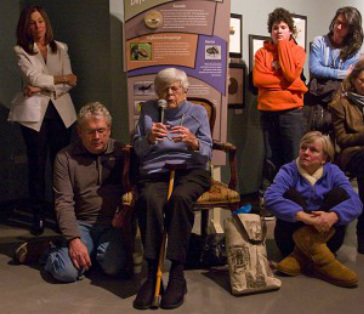 Betty speaking at the opening of Cultivate the Scientist in Every Child: The Philosophy of Frances and David Hawkins, University of Colorado, Boulder, Museum of Natural History, January 11, 2013.

During the past several years, Betty became a cherished friend and supporter of Hawkins Centers of Learning, and revitalized her valuable contributions to constructivist education.

While Betty had many accomplishments in a long lifetime, her flowering of activity around the writing of her book, “David Hawkins and the Pond Study,” was both remarkable and inspirational.  Betty wrote her book, and published it with her son Tom’s assistance, while in her 90′s. Also during these years, she shared her photographic archives with Hawkins Centers of Learning; contributed photos to the exhibit, Cultivate The Scientist in Every Child: The Philosophy of Frances and David Hawkins, and helped fund (and participated in) Cynthia Gray’s documentary film, “In The Child’s Garden: The Educational Legacy of Frances & David Hawkins.”

Betty was the photo-documentarian for the Mountain View Center for Environmental Education and for David Hawkins’ 1973 Pond Study, in which children followed their interests in studying a pond on the CU Boulder campus. Betty captured children and teachers deeply involved in a variety of learning experiences. Her comprehensive documentation of this multi-faceted project lets us know that educational history was being made there.

During her last few months, Betty was actively involved in reviving David Hawkins’ emphasis on children’s explorations of mathematics as means for understanding the world. Her passion for constructivist education remained undimmed during a meeting with colleagues, just weeks before her death.

While Betty’s work continues to inform us, her passion and energy serve to inspire us. She will be greatly missed by all who had the honor of knowing her.